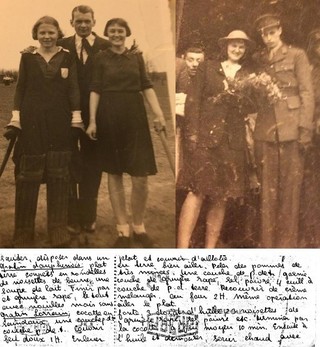 I love the pictures of her before the war, smiling and athletic playing field hockey or cricket. And I love her wedding picture with Timen after the war, both of them camp survivors, tall and gaunt, but ready to start living their lives again.

Guigui was one of the women who made a recipe book in the camp.

While I was doing the research for The Nine, I stumbled across a strange fact: starving people love to talk about food. More than just talk, concentration camp prisoners wrote recipe books with stolen scraps of paper and bound them using strips torn from rough sleeping pallets.

I read descriptions of how "cooks" would recite the making of a meal step by step to the other women as they lay in their lice infested bunks. Before they closed their eyes, they would listen to a recipe, like a prayer. On the half day of Sunday, the only fragment of free time they were permitted, they "ate" Sunday meals together in this way. It was a ritual that helped them survive. Perhaps the careful listing of steps gave the prisoners, who had no control over their lives, the illusion of control.

Food is deeply entwined with our identity. It is our culture, our history, our spirituality. Food is almost always central to our celebrations. Perhaps the memory of family meals, was the one memory, prisoners could permit themselves. There were many other memories that were too painful to evoke. But the memory of shared meals was safe and universal. Food was the great arena of solidarity. It lifted the women out of the isolation of the personal painful memory toward a collective shared memory.

Starving is physically painful. It gnaws at the soul, the starving person can think of little else, and the women had seen it drive people mad, make them do terrible things to each other. The recipes were a way to keep that insanity at bay. The accounts of the female French prisoners reported their pride that they had maintained civilized manners during the distribution of their daily watery soup. They had stayed solidaire in the face of grinding inhumanity.

After the war, like so many things that women experienced, the recipe books were not talked about. They were part of an unspoken story, perhaps because the women felt it would be seen as banal, feminine, even shameful to make recipe books in a concentration camp. No one would understand what those recipes meant, and how hungry they were when they wrote them.

Learning about the recipe books made me think about what it means to cook a meal, to feed our loved ones, to gather around a table. It made me think about the conversations held over long summer dinners outside. It made me remember that each of my children has a favorite meal, and when they come home, they request it. Sometimes when I have spent a day writing, and getting nowhere, emerging to cook a meal has felt like wild relief: here was something I could do that would be shared and appreciated. And the recipe books made me think that sometimes the most radical act of resistance is simply the act of sharing a meal.