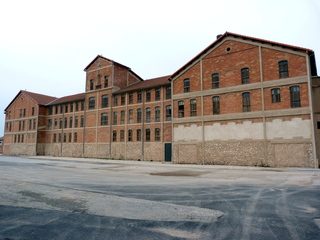 There it is: an ugly red brick heap of a building standing alone on a flat open plain, a desolate wind-swept landscape, surrounded by train tracks and little else. In this building between 1939 and 1942, more than 10,000 people were imprisoned in terrible conditions. Most of the prisoners were not French nationals; they were refugees in France from totalitarian and fascist regimes. They came to seek refuge in the land of “les droits de l’homme” from Spain and Russia, and from pogroms in Eastern Europe. And then the Germans invaded. They were Jews, and Gypsies, and artists, and famous scientists. In 1942, 2000 people were deported directly from here to Auschwitz where they were murdered.

I was curious to visit this place in Les Milles, a suburb of Aix-en-Provence because it recently was turned into a memorial and museum. I had learned about the site while researching the accounts of my great uncle Danny Benedite who worked with Varian Fry to help save countless artists, writers, musicians, and scientists from the Nazi threat. My uncle visited this camp, begged and got the release of Max Ernst and others from these walls. He deplored the conditions, wrote letters of protest to the Vichy government. In one account there is the story of him giving his winter coat to a writer friend he discovers has been swept up and taken here on one of the many terrifying round-ups conducted by the French Vichy authorities in Marseille.

Les Camps des Milles is now preserved as a memorial site, the only large concentration and deportation camp left intact and open to the public in France. It is a pilgrimage site for me. Not just because of my uncle and the family story that connects me to this place, but also because of its relevance today. There are small exhibitions about the Rwandan genocide and continued anti-Semitic attacks in France. There is an exhibition of accounts of people who have acted bravely to help save children and others in times of desperation all over the world. My uncle Danny can be counted among this group.

Deep in the cavernous interior I can smell the clay dirt and remember the accounts of red brick dust that infiltrated everything. I think of the artwork that was created by Han Bellmer and Ernst, inspired by these walls. And artwork by many others remains on the walls of the site. The prisoners created a life for themselves here, to fight against boredom, depression, and to preserve their dignity as much as possible. They held concerts and produced theatrical productions and operas. They held lectures and taught classes. There is a photo of a lecture given by the interned Otto Meyerhoff, winner in 1922 of the Nobel Prize in medicine. Sitting around the table is Thedeus Reichstein who will survive and go on to win the Nobel Prize in 1950 for his invention of cortisone.

There is a particularly moving exhibition about the 11,400 Jewish children that were deported to Auschwitz from all of France. Letters, clothes, photographs. At the end of the visit you can walk the path outside the walls to the train track where one wagon remains as a reminder of the deportation and final horrific journey.

The Nine follows the true story of my great aunt Helene Podliasky, who led a band of nine female resistance fighters as they escaped a German forced labor camp and made a ten-day journey across the front lines of WWII.