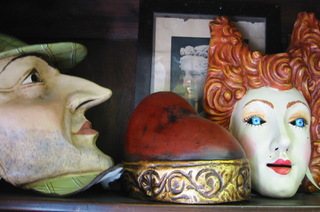 I am a feminist. I spent many hours in college insulting Freud and his stupid Penis Envy theory. I was not going to let this happen to my own daughter.

So I explained to her that though she did not have a penis she had something so much more special. She had a womb. A secret place inside her tummy where one day, if she chose and when she was ready, she could make a baby. She was lucky. She was able to grow a child in her womb. Her brother would never be able to do that.

I laid it on thick. I admit. There was a kind of vehemence to my lesson because the next thing I knew Noah was howling, I want to grow a baby in my tummy!

The gender identity issues just got more complex as they grew up. Now my twins are 18. We have discussions over dinner and we sometimes disagree. They think that though I say I’m a feminist, I’m still stuck in the past with my stereotypical expectations about gender. This came up when I said to my daughter that I found the young men her generation found sexy, so sickly and metro and sort of “unmanly.” To me they are post-apocalyptic androgynous with waxed chests and waif-like pre-adolescent boy bodies. She finds these statements from me offensive.

She turns her nose up at the over testosterone “manliness” of the Neanderthals she thinks I’m attracted to. To her it is this old model where I need to be helpless and the big macho guy will save me. She reminded me that I asked one of her boy friends to carry my heavy market basket. Why couldn’t I carry the basket myself? Or why didn’t I ask one of her girlfriends who were there and maybe just as strong as her male friend?

We also talk about how culture informs what we see as liberated or not. For example in America when the feminist movement first gained traction women fought for the right to give birth naturally without pain killers. Women could take back control of their bodies and not leave themselves helpless in the hands of the male medical establishment.

In France, women had been condemned for centuries to labor in pain because the Catholic Church said this was their just punishment for being daughters of Eve. So the first thing feminists in France demanded was the right to painless childbirth. One well-educated feminist asked me, “But would you have a tooth pulled without pain killer?”

Issues of gender identity and rights are complex and nuanced. What true equality looks like, what we ask for and from each other has to be open for discussion and dialogue. There isn’t a one-size fits all solution. My daughter wants her bisexual freedom and I want my Neanderthal, Vivre la difference.

But then sometimes a lightening rod event brings me clarity. When Emma Watson spoke up at the UN for the rights of women and declared proudly that she was a feminist, the backlash was amazing. Immediately hateful and sexually violent threats were being posted against her on social media, along with the threat to post nude photos of her on the Internet.

How far have we really gotten after all if calling yourself a feminist incites Taliban-like threats of retaliation? There is some deep-seated fear at play in this ugly culture of misogyny. If you can’t control women’s bodies, what can you control?

In my family, we are all feminists. It’s a work in progress. What that means will change as the world evolves. I am learning from my children that this generation might have fewer hang-ups than my own.

But I am also reminded of our bath time crisis many years ago when my son learned that having a place to put a shampoo cap for entertainment was no comparison to having a place to grow a baby. The world was unfair. No matter how hard I tried to console him with his penis, for months afterwards when asked, What do you want to be when you grow up? He would say, A girl.