About the end of wars 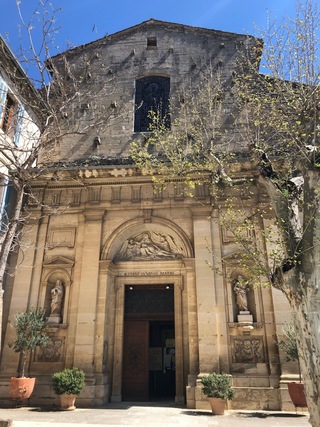 The church in Lumières

The chaotic unraveling at the end of wars is often the deadliest of times. The nine women in my story experienced this. Seventy-six years ago, on this day April 14, 1945, they were set on a Death March that was designed to kill them.

When I think about the horrific turmoil that was happening in Germany one month from the end of WWII, I remember a story I was told about the children in Lacoste, the small village in Provence near where I live. Most of the handful of children in the village had been young boys at the start of the war and they had grown into early adolescence over the four years. They were 14, 15, and 16 in 1945. They chaffed at not having been soldiers, at the humiliations of occupation, at the passivity of their parents, at the hunger and poverty they had experienced. When in 1945 the Germans who had lorded over them were now in retreat, the boys talked amongst themselves about how they wanted to get one of them, kill a boche. They talked about getting their fathers' hunting rifles, going into the woods and shooting at the Germans. They boasted about what they would do, loudly to each other and anyone within earshot, because that bravado posturing is what young men do. Except they were overheard by the man in the village who was the collaborator, the one who had profited from his good relations with the Germans. This man warned a Nazi official about the boys' plan. And the boys were rounded up and executed.

In one tragic moment, the village lost almost all their children. The parents, believing the collaborator was to blame, chased him out of the village and followed him down the hill to the church in Lumières. The man took refuge there. The villagers came crashing in, ready to kill him, even in a church, but the priests encircled him and protected him. Eventually he was able to escape to North Africa.

When I moved to this village in 2005, he had written to the mayor. He was dying. And he asked that he be allowed to be buried next to his parents and family in the village cemetery. The mayor granted his wish. His body was returned to the village and he is buried now in the cemetery where the boys are also buried.

When I first moved to Provence, with my curiosity and questions, I was warned that the stories of the Resistance were still raw. Near the end of the war, many had used the chaos to settle old scores—you could kill with impunity or cover up a shameful past. It was messy. It would be hard to unravel who had really been in the Resistance and who had profited by joining in the final days of the war.

The final days of the war in Germany were equally chaotic. Orders from Hitler had been to evacuate or liquidate all camps ahead of the Allies. All the satellite labor camps and the larger camps emptied, and groups of prisoners were marched to unknown destinations with no plan, no food, no water. SS soldiers shot at any prisoner who stumbled out of line or fell from exhaustion. With 5000 other women, the nine from my book were lined up and set out onto the road to march non-stop for thirty-six hours. It snowed the first night. They hadn't eaten in days. Soon the higher up officials abandoned the marches, and just the lowest German guards were left, terrified themselves, not knowing what to do, and sensing that they were in danger for their own lives. Some of the guards took clothes from the corpses of dead prisoners along the road and tried to slip in, to pass as prisoners. Near the end everything was unraveling. The frenzied confusion of the Death March brought clarity to the nine women, they had one choice: escape or die trying.